I just recently purchased a 2012 Motobecane Fantom CX from bikesdirect.com for $580 and had it delivered on Friday 8/17/12. They told me that it would come 90% assembled and the rest was up to me. Let me tell you, it wasn’t 90% assembled!! It was more like 75-80% because it took me almost an hour to put the thing together and their manual was very general (which they warned me about). It also was difficult because I’ve ridden bikes before but I’m a novice when it actually comes to the components and maintenance of a bicycle. Therefore the assembly process was a difficult one but I got all the parts to go together and the bike ended up being functional.

After I assembled the bike to the best of my abilities, I went to the Bike Gallery on Division street to buy a new bracket for my Kryptonite lock and a few other items like lights, and a cargo rack. The ride took me close to an hour and I didn’t feel anything wrong with the bike except for I haven’t ridden  for that long for some time and my butt felt sore to the point I was walking bow legged into the store. Along with buying the items, I was also planning on asking them to take a look at my bike to see if I installed it correctly and if all the bolts were tightened correctly. He took one look at the bike and asked me if the bike was assembled recently and I tentatively gave him a yes. He then proceeded to bombard me with all the mistakes I had and blamed the online shops for telling their customers that they would be able to assembly the bike when they probably don’t have the proper tools because they cost hundreds of dollars each. So after convincing me that I am a complete noob and if I ride the bike home then there is a good chance that I could cause permanent damage to the bike, I left the bike with him to properly assemble for $85 + $$ for misc. parts he will have to add.

The lesson I learned: Always refer to an expert when it comes to anything that requires complex assembly.

Here is a picture of my bike, I named it Naz’gul. 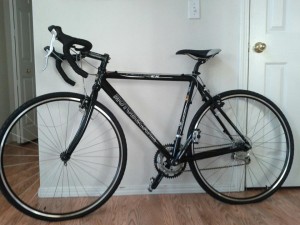