Sand in the City is an event held at Pioneer Square in Portland, Oregon that is sponsored by Mr. Yoshida and supports Impact NW which is an organization that provides support and aid to Northwest children. The event consists of hundreds of cubic yards of sand being dumped into Pioneer Square and then teams create sculptures around a central theme. There are a couple categories like competitors choice, 3rd, 2nd, and 1st, and the people’s choice award. The event was held on Friday July 20th this year and had 12 different teams competing; I was on the Turner/AMAA team and the central theme was “No place like home” and our take on it was “Our home in 2030”. Basically, we wanted people to be able to see our home in 2030 because we are currently over-loading the earth and we need to be more environmentally conscious if we want to thrive in a livable world in 2030. Therefore we used the theme of the Lorax to display and encourage that image because he is a stalwart for sustainability and the environment. It was my first time being involved in the event in any form and I had a complete blast!

The event started at 8:00 AM but I wasn’t able to make it till 9:00 because I had a superintendent’s breakfast at 6:00 AM followed by some safety training but I didn’t miss much. It was a lot more work than I expected! When I got there the forms were already nailed and placed so all we had to do was put the sand in the forms and start tamping and compacting. The only materials that were allowed was sand and water and only hand tools were allowed. I spent the majority of the time shoveling sand from the large community sand pile into our own pile so that we can start filling the forms. The more experienced team members handled the mixing of water and sand along with compacting the sand. Our total structure was designed to be 9 feet tall but that prove to be too tall so we scaled it down a bit to around 7 feet tall. The tall structure was the Once-ler’s house and took 4 forms and a crap load of sand and man power. We had around 23 people with around 12 people not coming until we were doing pulling the forms because they were the architects and were in charge of drawing out the details. Below are pictures of what our project looks like during and after construction.

All work at to be completed at 4:00 PM because they judges make you step away from your work and if you continue then you will be disqualified. We finished right up to the last second and so did every other team. The judges then walk around to decide the winner and announce an hour later. We ended up placing 3rd place which sucks because we won it last year and I believe our sculpture was outstanding but then again, I am biased. But we still have hope in the people’s choice which will end on Sunday at 1 PM. I will be there for that to see if we won or not and also that is the same day they demolish all of the sand sculptures so it should be fun to watch. I also got to get a picture with Mr. Yoshida who is the main proponent of the event. 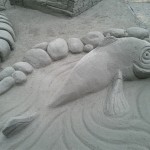 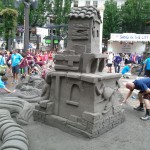 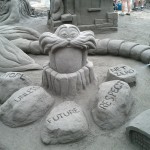 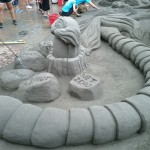 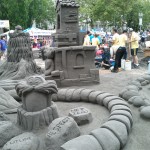 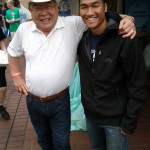